_This documentation is specifically for the tests in the sourcegraph/sourcegraph repository. For our general testing principles, please see “Testing Principles”._

Test coverage from unit tests is tracked in Codecov under the unit flag.

Browser-based tests act like a user by opening a browser and clicking, typing, and navigating around in an automated fashion. We use Puppeteer to control the browser programmatically, while the test itself runs in the test runner Mocha.

We have two kinds of these tests in accordance with our testing principles in the handbook. Please refer to the handbook for the trade-offs and use cases of each, and find specific instructions on how to run each further below.

When a test fails, a screenshot is saved to the ./puppeteer directory. In iTerm (macOS) and on Buildkite, it is also displayed inline in the terminal log output. This may trigger a prompt “Allow Terminal-initiated download?” in iTerm. Tick “Remember my choice” and click “Yes” if you want the inline screenshots to show up.

When a browser-based test fails (example), CI displays a snapshot of the failure inline in the Buildkite output and Jest prints the :

For end-to-end tests that failed in CI, a video of the session is available in the Artifacts tab:

Our test driver accepts various environment variables that can be used to control Puppeteer’s behavior:

There are multiple useful ways you can filter the running tests for debugging.

To stop the test run on the first failing test, append --bail to your command.

You can also single-out one test with it.only/test.only:

You can find a complete list of all possible options in the Mocha documentation.

Retrying the Buildkite step can help determine whether the test is flaky or broken. If it’s flaky, disable it with it.skip() and file an issue on the author.

In the rare condition that CI appears stuck on end-to-end or integration tests and the video recording does not help, you can view the screen in VNC Viewer (free) by forwarding port 5900 to the pod. Find the pod name on the top right of the step in Buildkite:

Client integration tests test only the client code (JS and CSS). The role of these integration tests is to provide in-browser testing of complex UI flows in isolation from the Sourcegraph backend. All backend interactions are stubbed or recorded and replayed. The integration test suite for the webapp can be found in web/src/integration.

Test coverage from integration tests is tracked in Codecov under the flag integration.

To run integration tests for the web app:

A Sourcegraph instance does not need to be running, because all backend interactions are stubbed.

See the above sections for how to debug the tests, which applies to both integration and end-to-end tests.

Calling testContext.overrideGraphQl() in a test or beforeEach() hook with an object map allows you to override GraphQL queries and mutations made by the client code. The map is indexed by the unique query name specified in the implementation, for example ResolveRepo. The TypeScript types of the overrides are specifically generated for each query to validate the shape of the mock results and provide autocompletion. If, during a test, a query is made that has no corresponding mock, the request will be rejected and an error will be logged with details about the query.

There are default mock responses for queries made in almost every test, which you can extend with object spread syntax if needed.

testContext.overrideGraphQL() can be called multiple times during a test if the response to one or more queries should change, e.g. after an action was taken that causes a change on the backend (see the next section for how to assert those).

Waiting for a mutation and checking passed variables

To verify that the client sent a GraphQL mutation to the backend, you can use testContext.waitForRequest(). Pass it a callback that triggers the request (e.g. clicking a “Save” button in a form). The function returns the variables that were passed to the mutation, which can be asserted with assert.deepStrictEqual().

Only use testContext.waitForRequest() for behavior you need to test, not to generally wait for parts of the application to load. Whether a query is made for loading is an implementation detail, instead assert and wait on the DOM using waitForSelector() or retry().

The backend provides the webapp with a context object under window.context. You can override this object in integration tests using testContext.overrideJsContext(). There is a default mock JSContext that you can extend with object spread syntax if needed.

End-to-end tests test the whole app: JavaScript, CSS styles, and backend. They can be found in web/src/end-to-end.

Test coverage by end-to-end tests is tracked in Codecov under the flag e2e.

To run all end-to-end tests locally, a local instance needs to be running. To run the tests against it, create a user test with password testtesttest and promote it site admin. Then run in the repository root:

For regression tests, you can also run tests selectively with a command like yarn run test:regression:search in the web/ directory, which runs the tests for search functionality.

End-to-end tests need to set up all backend and session state needed for the test in before() or beforeEach() hooks. This includes signing the user in, setting up external services and syncing repositories. Setup should be idempotent, so that tests can be run multiple times without failure or expensive re-setups. Prefer using the API for setup over clicking through the UI, because it is less likely to change and faster. The test driver has some convenience methods for common tasks, e.g. driver.ensureExternalService() and driver.ensureLoggedIn().

CSS selectors in e2e tests should always refer to CSS classes prefixed with test-. This makes them easy to spot in the implementation and therefor less likely to accidentally break. test- classes are never referenced in stylesheets, they are added in addition to styling classes. If an element you are trying to select does not have a test- class yet, modify the implementation to add it.

If the element you are trying to select appears multiple times on the page (e.g. a button in a list) and you need to select a specific instance, you can use data-test-* attributes in the implementation:

It’s generally unreliable to hold references to items that are acted upon later. In other words, don’t do this: 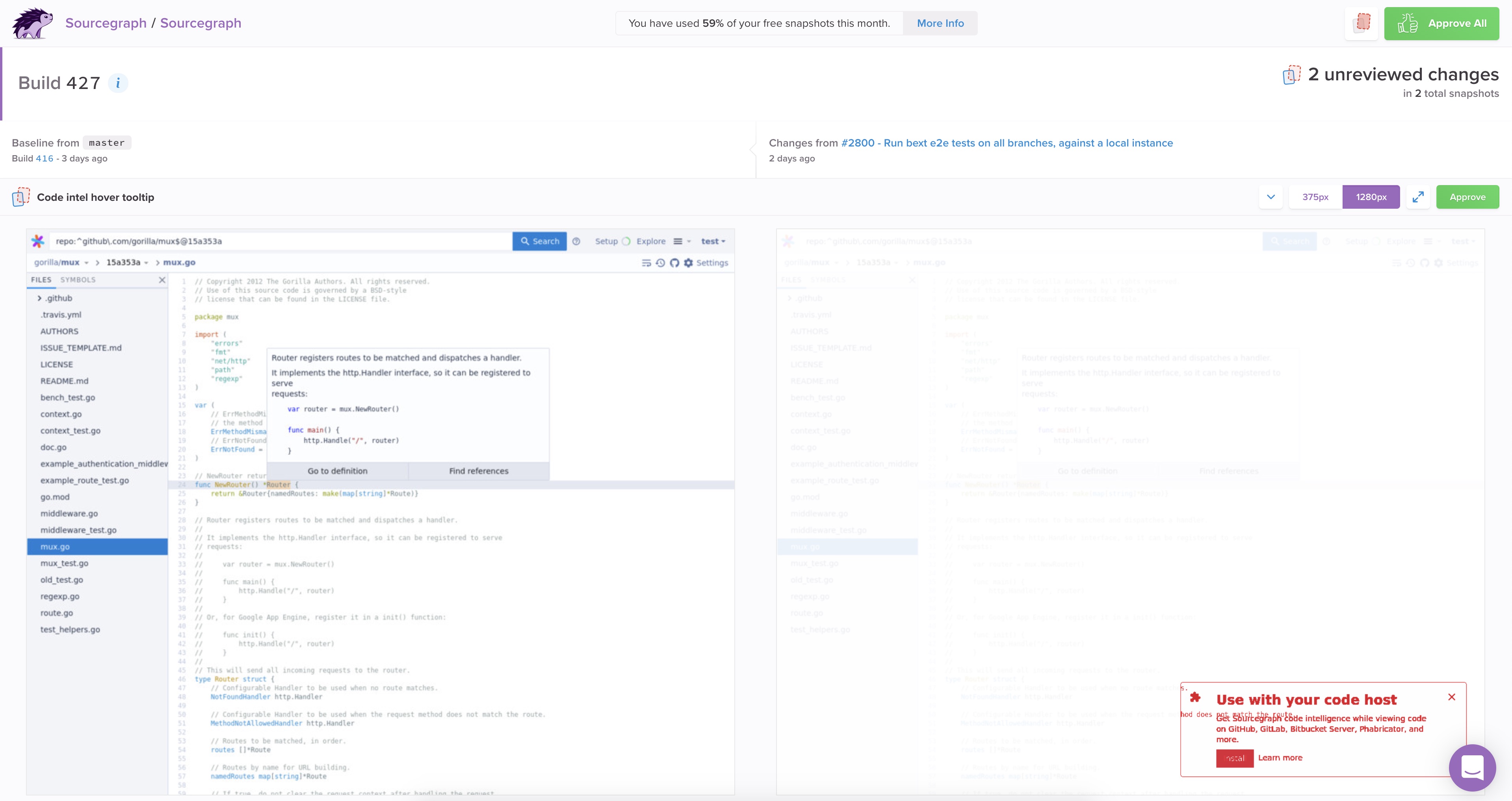 Open an existing appropiate browser-based test file (end-to-end or integration) or create a new one. You can take screenshot in any test by calling percySnapshot():

When running in CI, this will take a screenshot of the web page at that point in time in the test and upload it to Percy. When you submit the PR, Percy will fail until you approve the new snapshot.

This can be solved with Percy specific CSS that will be applied only when taking the snapshot and allow you to hide flaky elements with display: none. In simple cases, you can simply apply the percy-hide CSS class to the problematic element and it will be hidden from Percy.

For pull requests, only a limited set of tests are run in CI. If you would like to run the full main test suite in a PR, including backend integration tests, e2e, and qa, you can name your branch with the prefix master-dry-run/ and this will run all the tests that will be ran when the PR is checked into main.