Lifecycle of an upload

Uploaded index files are processed asynchronously from a queue. Each upload has an attached state that can change over time as work associated with that data is performed. The following diagram shows transition paths from one possible state of an upload to another.

The general happy-path for an upload is: UPLOADING, QUEUED, PROCESSING, then COMPLETED.

Processing of a precise code intelligence index file may occur due to malformed input or due to transient errors related to the network (for example). An upload will enter the FAILED state on the former type of error and the ERRORED state. Errored uploads may be retried a number of times before moving into the FAILED state.

At any point, the upload record may be deleted. This can happen because the record is being replaced by a newer upload, due to age of the upload record, or due to explicit deletion by the user. Deleting a record that could be used to resolve to code intelligence queries will first move into the DELETING state. Moving temporarily into this state allows Sourcegraph to smoothly transition the set of code intelligence uploads that are visible for query resolution.

Changing the state of an upload to or from the COMPLETED state requires that the repository commit graph be updated. This process can be computationally expensive for the worker service and/or postgres database.

Lifecycle of an upload (via UI)

After successful upload of an index file, the Sourcegraph CLI will display a URL on the target instance that shows the progress of that upload.

Administrators of a Sourcegraph instance can see a global view of precise code intelligence uploads across all repositories from the Site Admin page. 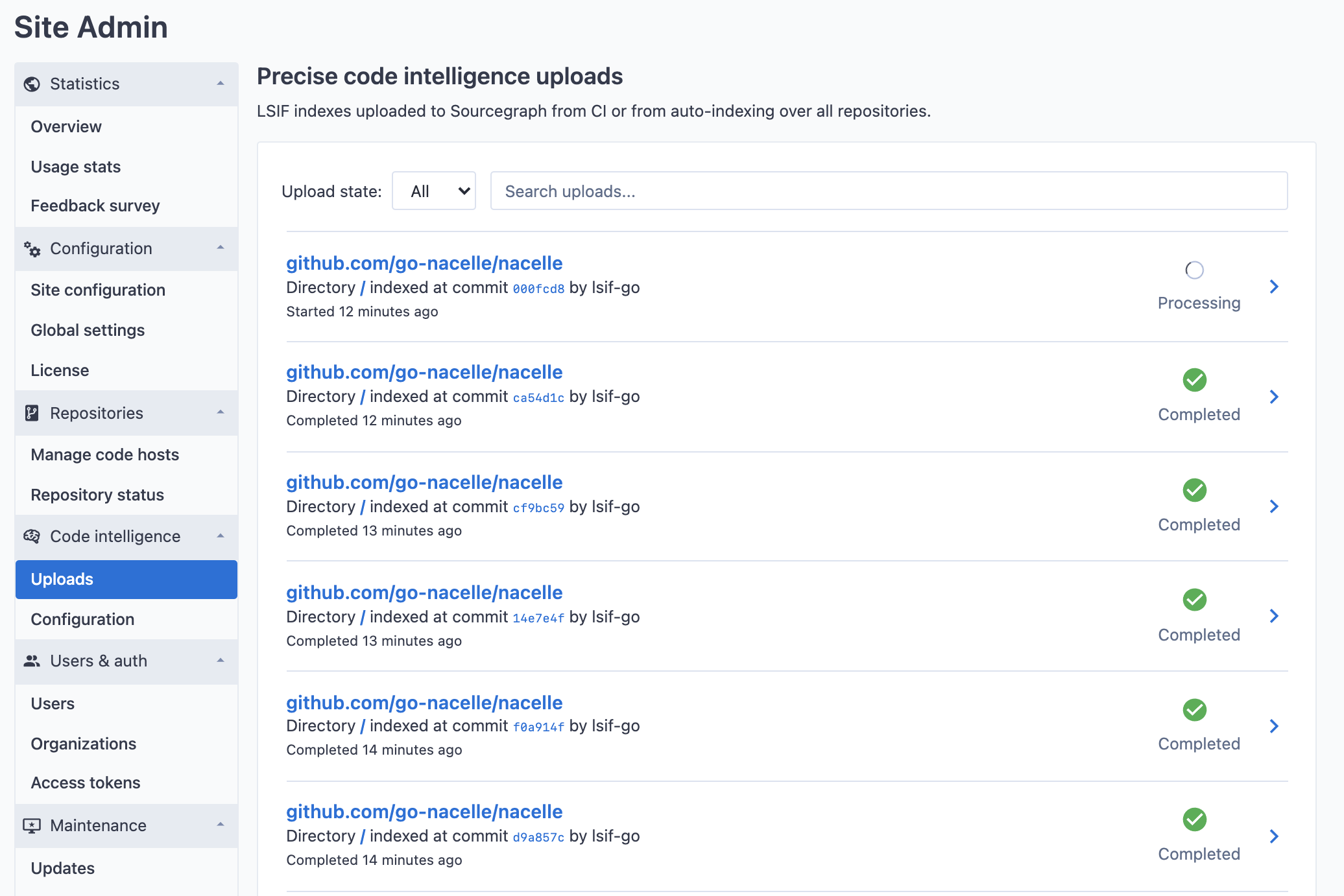 Sourcegraph keeps a mapping from a commit of a repository to the set of upload records that can resolve a query for that commit. When an upload record moves into or away from the COMPLETED state, the set of eligible uploads change and this mapping must be recalculated.

When an upload changes state, we flag the repository as needing to be updated. Then the worker service will update the commit graph and unset the flag for that repository asynchronously.

While this flag is set, the repository’s commit graph is considered stale. This simply means that there may be some upload records in a COMPLETED state that aren’t yet being used to resolve code intelligence queries (as might be expected).

The state of a repository’s commit graph can be seen in the code intelligence page in the target repository’s index page. 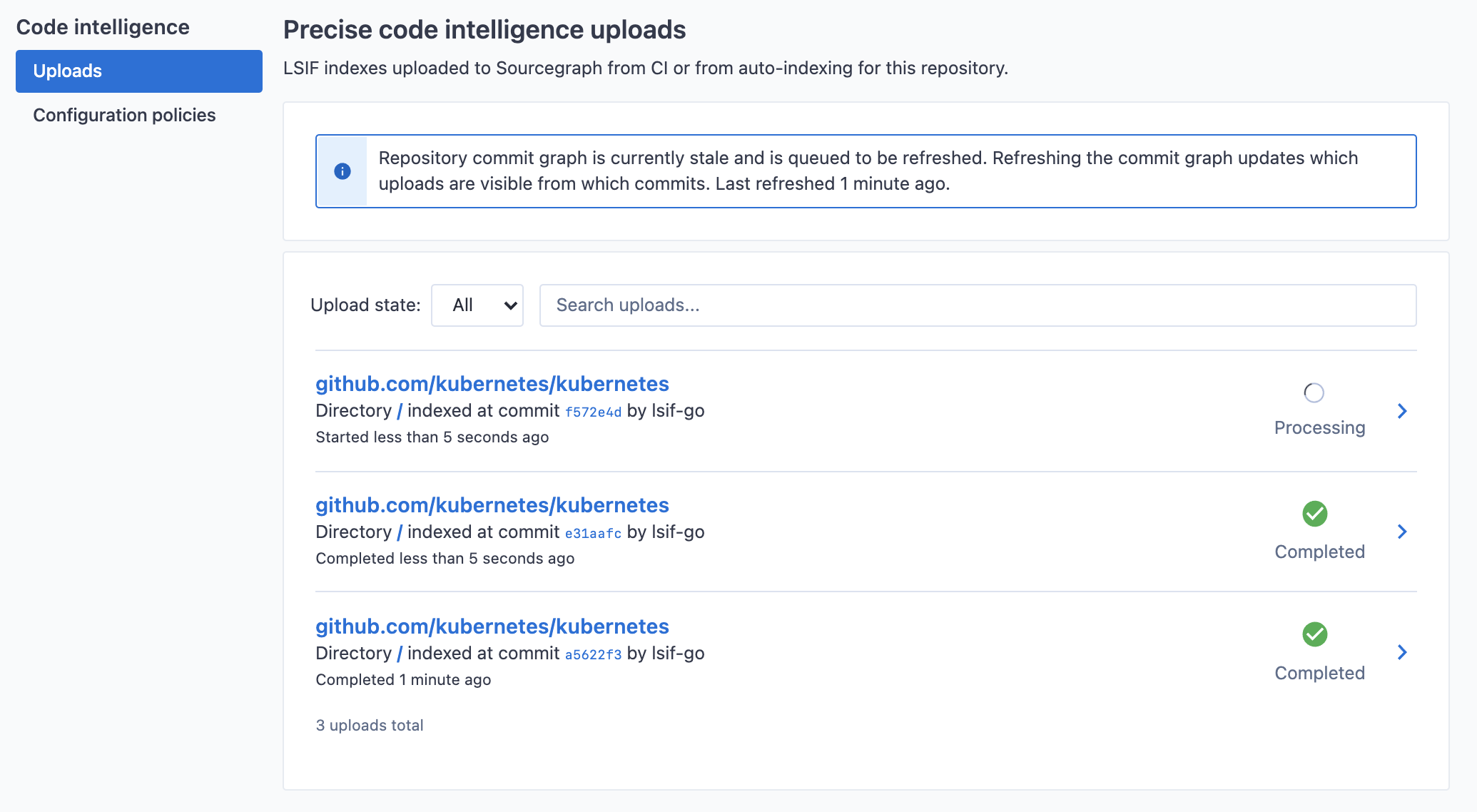 Once the commit graph has updated (and no subsequent changes to that repository’s uploads have occurred), the repository commit graph is no longer considered stale. 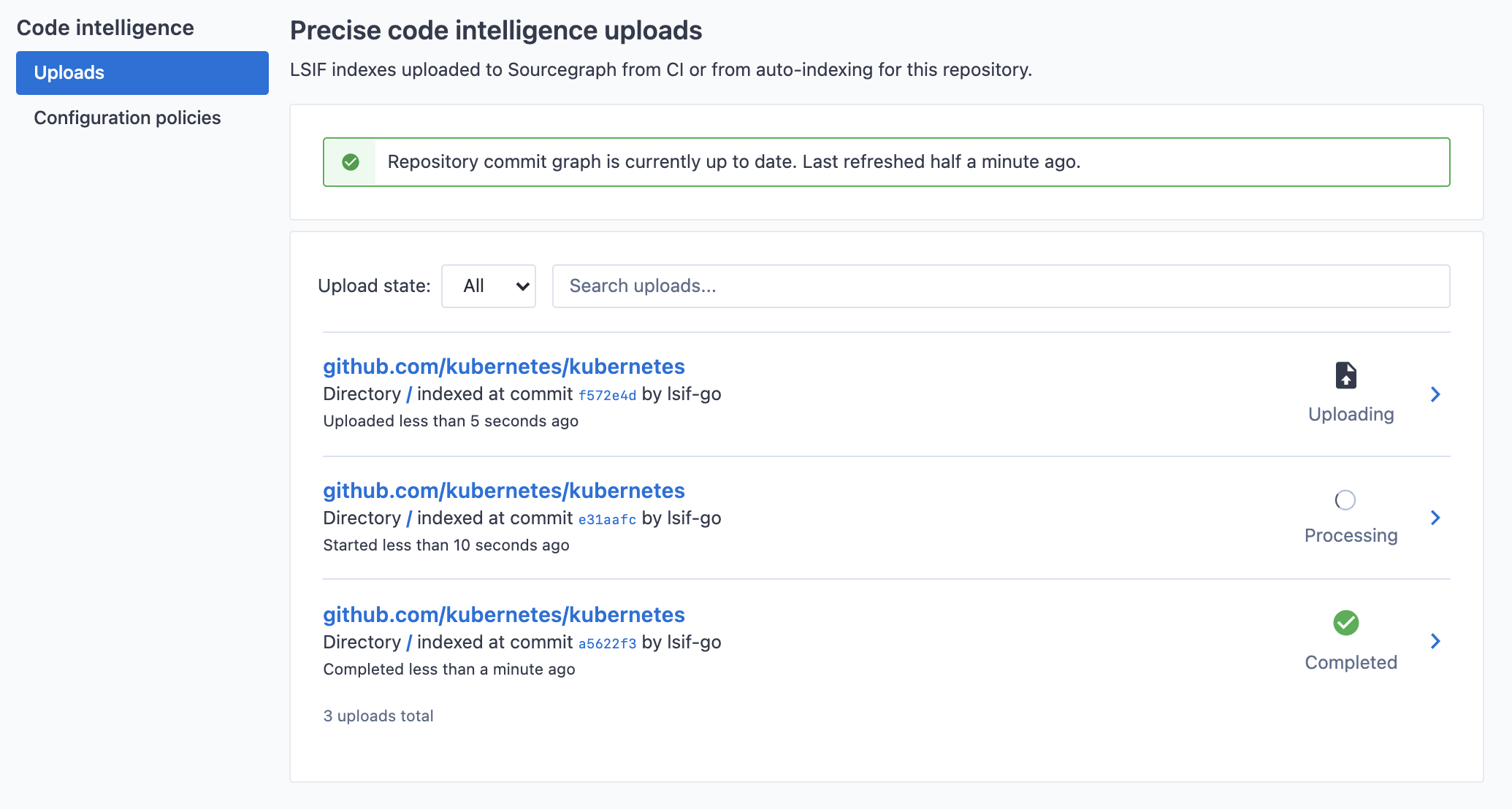