Beta This feature is in beta and might change in the future.

We're very much looking for input and feedback on this feature. You can either contact us directly, file an issue, or tweet at us.

Executors provide a sandbox that can run resource-intensive or untrusted tasks on behalf of the Sourcegraph instance, such as:

NOTE: Executors are available with no additional setup required on Sourcegraph Cloud.

Executors by default use KVM-based micro VMs powered by Firecracker in accordance with our sandboxing model to isolate jobs from each other and the host. This requires executors to be run on machines capable of running Linux KVM extensions. On the most popular cloud providers, this either means running executors on bare-metal machines (AWS) or machines capable of nested virtualization (GCP).

Optionally, executors can be run without using KVM-based isolation, which is less secure but might be easier to run on common machines.

It is recommended to set the resources based on the number of jobs an instance will process in parallel.

A single job should have the following resources available.

So, if you expect an Executor instance to process up to 4 jobs in parallel, the recommended resources for the machine are

The above recommended resources can be changed to fit your constraints. See below for configuring resources for a Job.

Note: the smallest machine type on AWS that can support Executors with Firecracker is c5n.metal (72 vCPU and 192GB of Memory), but concurrency can be turned up for the additional cost.

The maximum number of Jobs an Executor instance can run in parallel is configured by the Environment Variable EXECUTOR_MAXIMUM_NUM_JOBS.

Note: changing CPU and Memory for jobs will affect the overall requirements for an Executor instance.

It is recommended to add the following Disk configuration in AWS.

Machines on Cloud Providers have additional constraints for use with firecracker.

Executors must be run separately from your Sourcegraph instance.

Before starting any executors, generate an arbitrary secret string (with at least 20 characters) and set it as the executors.accessToken key in your Sourcegraph instance’s site-config.

Once the shared secret is set in Sourcegraph, you can start setting up executors that can use that access token to talk to the Sourcegraph instance.

Install executor on your machine

If executor instances boot correctly and can authenticate with the Sourcegraph frontend, they will show up in the Executors page under Site Admin > Maintenance. 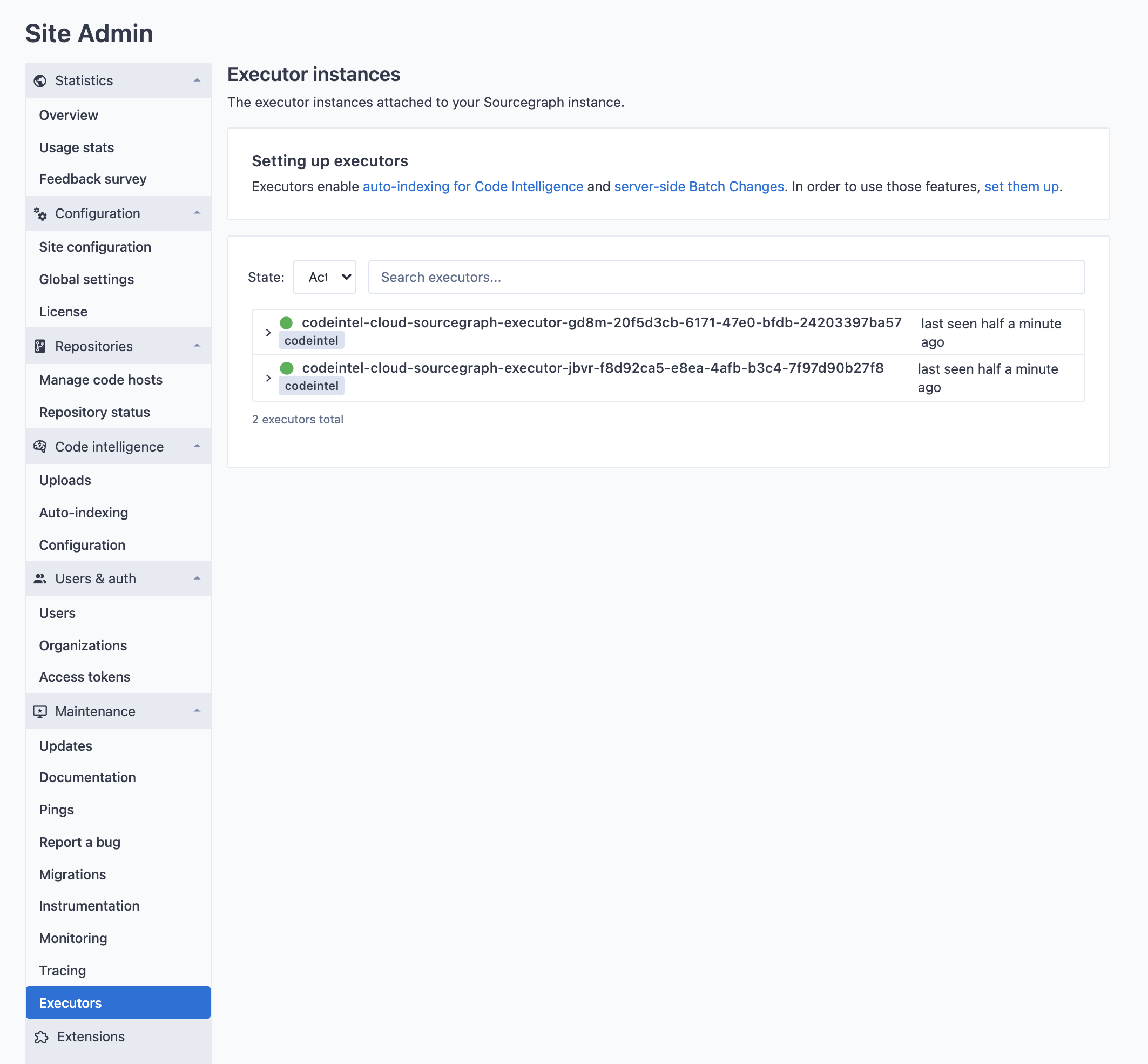 If you want to use docker images stored in a private registry that requires authentication, follow this section to configure it.

Depending on the executor runtime that is being used, different options exist for provisioning access to private container registries:

When multiple of the above options are combined, executors will use them in the following order:

The docker CLI supports three ways to use credentials:

Credential helpers and credential stores are only available for use with the config.json configuration option, as they require additional infrastructural changes. Thus, those options are not available on Sourcegraph Cloud.

The EXECUTOR_DOCKER_AUTH_CONFIG environment variable and the DOCKER_AUTH_CONFIG secret expect a docker config with only the necessary properties set for configuring authentication. The format of this config supports multiple registries to be configured and looks like this:

You can either create this config yourself by hand, or let docker do it for you by running:

NOTE: This doesn’t work on Docker for Mac if “Securely store Docker logins in macOS keychain” is enabled, as it would store it in the credentials store instead.

You can also run the following:

and then paste the result of that into a JSON string like this:

For Google Container Registry, follow this guide for how to obtain long-lived static credentials.

Configuring the auth config for use in executors